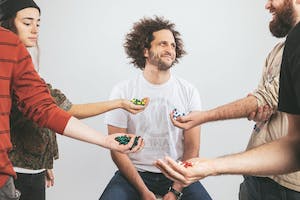 Andy Frasco and the UN

All social distancing rules and regulations must be followed at all times while inside the venue. Patrons who fail to follow safe distancing at the request of staff will be safely removed from the venue; no refunds will be given.

All patrons will be required to wear a mask when entering and moving around the venue.

Sanitizing stations will be available around the venue. Partitions are placed at the bar. Please keep your mask on when ordering.

Bar station and commonly touched areas will be cleaned throughout the show.

We ask that you please maintain a six-foot distance between you and other concert-goers not in your party.

By attending this show, you and your guests voluntarily assume all risks related to exposure to COVID-19 and agree not to hold the artists, the venue; or any of their affiliates, directors, officers, employees, agents liable for any illness or injury.

“We’re going through a mental health crisis right now,” says Andy Frasco. “Loneliness, depression, suicide, it’s all on the rise. When you’re struggling in the moment, it can feel like you’re the only one, but that’s just not the truth. I wanted to make a record to remind you that you’re not alone.”

It makes sense, then, that Frasco’s rousing new LP, ‘Keep On Keepin’ On,’ lands somewhere between an emotionally raw therapy session and a rowdy house party. Produced in part by Widespread Panic’s Dave Schools and in part by former Awolnation keyboardist Kenny Carkeet, the collection finds Frasco digging deeper than he’s ever dug before, fusing ecstatic rock and soul with infectious pop and funk as he grapples with the kind of demons he’s spent the better part of his adult life running from. The songs here are blunt in their honesty and unsparing in their self-examination, but they remain, at their core, works of great hope and promise. They’re the work of a man who’s been through the darkest part of the night and, now that dawn is finally breaking, is ready to share his story.

“Making this record helped me accept that I needed therapy in my life,” Frasco explains. “I always used to think I was too proud or too strong to have a therapist, but I realized that was all bullshit. I’m not always the fun, wild guy people see onstage, and it felt like time to talk about who I really am.”

Born and raised in California, Frasco’s first exposure to the music industry came not onstage, but rather in an office. As a young teenager, he worked with legendary indie label Drive-Thru Records and helped book bands like Hellogoodbye, and by the time he turned 18, he’d already moved to New York City for a gig with Atlantic Records. When the job fell through, though, Frasco made a leap of faith and decided to launch his own career as an artist, taking everything he’d learned working with other bands and applying it to himself.

“I figured I could teach myself an instrument, book my own tours, and try to write some songs that’d help make the world go round,” he says. “I bought a van with my bar mitzvah money, called about 3,000 venues, and managed to book myself 200 shows in that first year alone.”

Initially, Frasco hired local pickup musicians off of Craigslist to back him for gigs, but soon he put together a steady(ish) lineup, and Andy Frasco & The U.N. began taking the world by storm. Since its inception, the group would release a series of acclaimed records, share bills with the likes of Leon Russell, Galactic, Gary Clark, Jr., The Revivalists, and Marcus King among others, and slay festival stages everywhere from Mountain Jam in the U.S. to Rock am Ring in Germany and COTAI Jazz & Blues in China (this summer, Frasco will appear at both Bonnaroo and FloydFest). NME hailed the constantly evolving group as “party-starting touring stalwarts,” while Relix praised their “raucous energy,” and Clash lauded their live show as a “nightly high-octane experience that doubles as a celebration of life and music…energized by a powerfully entertaining multi-cultural soundtrack that will shake the foundations of all nearby structures.”

Every party has to end sometime, though, and while it seemed Frasco was living out his rock and roll dreams on tour, he was facing an internal darkness few knew about.

“I hit a breaking point,” he explains. “Last year, I was sitting alone in my van, and I realized that I didn’t know who my friends were. Worse, I didn’t know who I was. I was drinking too much, I was addicted to cocaine, and I was dealing with really heavy depression. I even contemplated suicide, but I decided that if I’m fortunate enough to leave behind a legacy, I didn’t want to be remembered just as some good-time party guy. I wanted to show people that I’m more than the crowd-surfing, Jameson-drinking maniac they see onstage.”

So, for the first time in his life, Frasco began writing poetry. The idea was that the poems would eventually become songs, but Frasco decided to start just the words to ensure that his message of survival and resilience remained at the heart of everything he did. He wrote about despair and anxiety, about friendship and growth, about accountability and potential. Whenever he could scrape together a few days off from tour, he’d fly home to LA to work with Carkeet or head to Richmond to collaborate with Schools on transforming the poems into defiant rock and roll anthems. Over the course of a single 100-night stretch, Andy Frasco & the U.N. played 81 shows and managed to record the entire album with the remaining 19 days.

The joy Frasco takes in his work is obvious from the very start of ‘Keep On Keepin’ On,’ which roars out of the gate with the thrilling title track. Inspired in part by the story of comedian Gary Gulman (Frasco recently scored ‘The Great Depresh,’ an HBO documentary exploring the comic’s struggles with depression that was produced by Judd Apatow and directed by Mike Bonfiglio), the song is equal parts self-help and sing-along, and like much of the record to come, it celebrates perseverance in the face of pain. The soulful “I’ve Got A Long Way To Go” reflects on the strength it takes to acknowledge your problems, while the driving “Good Man” examines how hard (and how rewarding) it is to become a better version of yourself, and the soaring “Animals” reaches out in solidarity to anyone who needs an a hand in the depths of their depression.

“I host a podcast where I talk to musicians and comedians and actors about life on the road,” says Frasco, who’s interviewed everyone from Portugal. The Man to Todd Barry on his show. “Those conversations have been so eye opening, and they helped me realize that I wasn’t alone in what I was dealing with. I wanted to find a way to offer that same comfort to people with my music.”

While there are no shortcuts on the road to fulfillment, Frasco did find some pearls of wisdom on his journey that he was eager to share. “Happiness is living in the moment,” he proclaims on the epic “Shine,” introducing a mantra that could easily double as a thesis statement for the record as a whole. The funky “None Of Those Things” affirms that material wealth can never compare to the riches that come from being present in the moment, while the slinky “Getaway” declares that the only thing standing between us and our potential is ourselves, and the tender “Feel It In Our Bones” promises that, at the end of the day, “you are never alone.”

“I wanted to approach suffering with optimism on this record,” reflects Frasco. “I’m not the kind of guy to sit there and drown in my sorrows; I’m the kind of guy who wants to get out and fight for my happiness. Change is possible if you’re willing to do the work. You’ve got just got to keep on keepin’ on.” 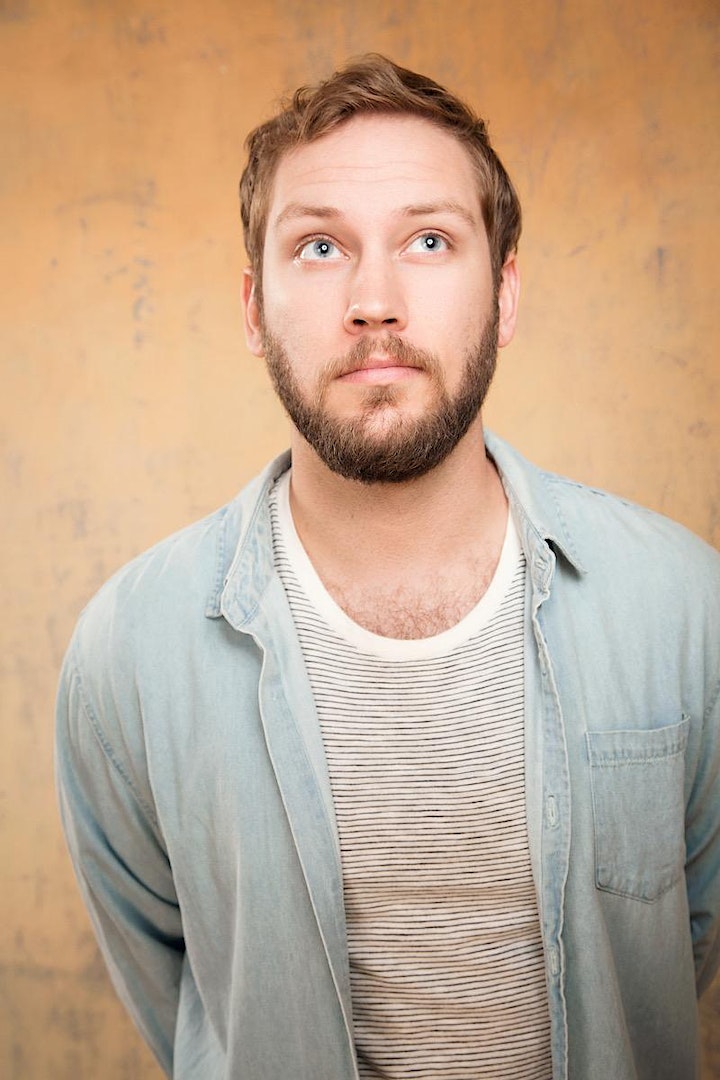 Kyle Ayers is a comedian writer, actor, and producer. You may have seen his standup on CONAN, or heard his debut album “Happiness” which hit the top of the comedy charts when it debuted on Blonde Medicine Records.

“Few comedians tempt and tango with chaos quite like Kyle Ayers… Kyle thrives in rolling with whatever’s happening in the moment.” - The Comedy Bureau

He has performed at Bonnaroo, and he also has his own show running on Sirius XM radio, and you may have also seen or heard him on Fuse, Comedy Central, VH1, and more, as well as in the feature film Box Elder. He has performed multiple times at the prestigious Just for Laughs Comedy Festival in Montreal, where he was heralded as a “breakout star.” He’s headlined all over the world, including The New York Comedy Festival, RIOT LA, The World Comedy Summit in Copenhagen, High Plains Comedy in Denver, and more.

He once tweeted about people breaking up on his roof in Brooklyn and it went viral before everything went viral. He helped write Andy Frasco’s World Saving Shit Show, and wrote this part into his bio just today.

His podcast show Never Seen It, where comedians rewrite famous movies and TV shows they’ve never seen, is now a top iTunes charting podcast on Starburns Audio, featuring Dan Harmon, Henry Zebrowski, and more, and has been featured at festivals around the US and Canada.