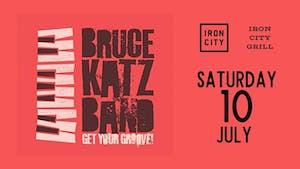 Bruce Katz is a legendary keyboardist (Hammond B3 and Piano) who has released 11 albums as a leader and has appeared on over 75 other CDs with the likes of John Hammond, Delbert McClinton, Ronnie Earl, Little Milton, Butch Trucks, Duke Robillard, David "Fathead" Newman, and many, many others.

Bruce is a six time (2008, 2009, 2010, 2015, 2019, 2020) Nominee for the Blues Music Award (W.C. Handy Award) for "Pinetop Perkins Piano Player of the Year", selected by the Blues Foundation of Memphis, TN. He won the BMA for Acoustic Blues Album of the Year in 2019 for his collaboration with Joe Louis Walker and Giles Robson for Journeys to the Heart of the Blues and is nominated again in 2020 for the same award for his acoustic piano album Solo Ride. He was also nominated for "Outstanding Musician (Keyboards)" by Living Blues Magazine in 2015 and 2019.

He is a unique player and composer who combines Blues and American Roots music with elements of jazz, and improvisational rock music that creates a signature sound that is all is own.

Bruce began playing piano at age 5 and has a lengthy background in classical piano. After hearing a Bessie Smith record when he was 10 years old, he started teaching himself blues and early jazz on the piano. He then heard boogie-woogie and swing music and continued his musical journey into more aspects of jazz and American roots music. Bruce attended Berklee College of Music in the mid-1970s, studying Composition and Performance.

For the next fifteen years, he performed with many of the leading musicians in New England, and played “on the road” for long stretches of time. In the early 1980s, Bruce played with Big Mama Thornton on her East Coast tours and this experience revived his desire to play Blues Music as a primary focus.

After a particularly long stint of touring in the late '80s with Barrence Whitfield and the Savages, he decided to come off the road and enrolled at the New England Conservatory of Music in Boston where he earned a Master's degree in Jazz Performance and studied with Geri Allen, Paul Bley, Cecil McBee, and George Russell. It was during this time that he conceived of and started writing music that became the Bruce Katz Band.

In 1992, he met Ronnie Earl, who soon invited him to join his band, The Broadcasters. During his nearly five-year stint with Earl, Katz toured the world and performed on six albums, writing and co- writing many of the tunes, such as "The Colour of Love," "Ice Cream Man," and "Hippology." The album “Grateful Heart” (Bullseye) won the Downbeat Critics Poll for Best Blues Album of 1996.

In 1992 as well, Katz debuted his first solo album, "Crescent Crawl", on the AudioQuest label. He released "Transformation" the following year. Just before the release of "Mississippi Moan" in 1997, his third solo album, Katz left the Broadcasters to concentrate on a solo career. At that point, the Bruce Katz Band began touring the U.S. and Europe, and has been his ongoing focus, in addition to his many other projects.

His albums have consistently appeared high on the national and international radio play charts and have garnered critical and popular acclaim.

Bruce has also been the subject of feature stories and reviews in most of the leading blues and jazz publications throughout the world.

In addition to performing, Katz teaches piano, Hammond organ and theory privately at his studio in West Shokan, NY. Bruce teaches long-distance online "Skype" lessons as well. He also conducts Master Classes in Blues/Jazz Piano Style and History, Hammond B3 and Blues History, which he has done at various schools, universities and music festivals worldwide.

Formerly from Boston, Bruce has been based in Woodstock, NY since 2005.