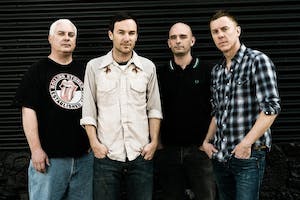 The Toadies with Reverend Horton Heat

Toadies play prickly hard rock punctuated by jagged riffs and misanthropic lyrics. Led by frontman Vaden Todd Lewis, the Toadies are usually dismissed as a one-hit wonder because of their lone breakthrough single, 1995’s “Possum Kingdom,” but the band’s punk-style rock songs made them a snarling remedy to the more commercial sounds of the 1990s’ grunge and alternative-rock superstars.

Formed in 1985, THE REVEREND HORTON HEAT exploded on the scene by playing gigs around their hometown of Dallas, Texas, mixing elements of surf, country, punk, big band and rockabilly to create a genre that took the world by storm. Often imitated, never duplicated, the Rev has continued to garner the support of both the underground rockabilly/ psychobilly scene and mainstream critics. Throughout the band's million plus album selling career, their music has been featured in countless TV shows, movies and commercials, it's impossible to deny the powerful force that is THE REVEREND HORTON HEAT. They continue to electrify audiences time and time again with their incredible stage presence, rock 'n roll charisma and contagious energy.