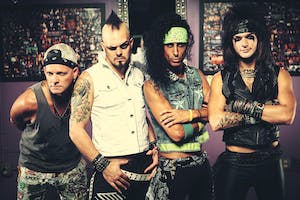 Facebook
Twitter
Tickets are non-refundable The Velcro Pygmies are everything that's right about rock n roll. Loud, fast, larger than life, and in your face.

Big lights, foul language, tight pants and the occasional boob. They've been compared to the likes of Van Halen, Poison, Bon Jovi, and Air Supply (They've got a sensitive side too). If you like "Big Rock" this is the band for you. If you are more into the "Hippie" thing don't wa...ste your time; you'll hate them.

The band released it's 6th record in 07, American Muscle, which is a collection of 10 original arena rock anthems designed to blow the 6x9s right out of your Trans Am, and an inspired cover of Sweet Home Alabama. Their relentless tour schedule carries them all across the eastern part of the US with the occasional trip to Texas where they are wanted for numerous traffic violations. The band's fan base encompasses all ages races and genders plus animals really like them too.

The Pygmies consist of Jason "DEP" Reed (take a look at his picture and you'll know why he's called that) on bass, Chris Eddins, the world's most entertaining drummer. Angel the blonde mohawk axeman, and Cameron, wants to be David Lee Roth, Flener on lead vocals. The band is a unique blend of personalities and energies that create a massive rock experience. It's a trip back to when rock n roll was fun and entertaining and not political or angry.