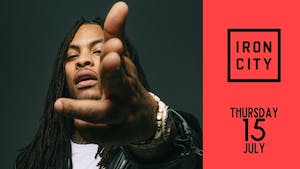 Born Juaquin James Malphurs, the global icon and rapper more commonly known as Waka Flocka Flame. Waka is known for putting trap back on the map, dropping the first volume of his street classic Salute Me or Shoot Me that caught fire with songs, “We On The Way, “Dreads N Gold” and his breakout single “O Let’s Do it.” The mixtape’s buzz allowed Waka to release his proper debut Flockaveli, which peaked at No. 2 on the Billboard 100. With many platinum signature hit records including “No hands” and “Wild Boy” there’s a high chance Waka’s music will be played at your party.

With Flockaveli 2 People can only come to expect the same energy that Waka always brings to the party. His epic touring and performance style are some of the reasons he’s earned the nickname “Turn Up God.” A style that translates into the EDM world Waka also calls his second home now, he fell in the love with the genre during a tour in Europe a few years ago. "Music is like anger management,” he says. “It’s fun. You get to express yourself.”

Waka Flocka is looking forward and ready to express a new musical direction with Flockaveli II. Set to feature production from Southside, and Lex Luger and many more. For Flockaveli II, Waka is approaching this third studio album the same way as his previous projects: trap banger after trap banger.

Waka’s laid-back demeanor makes him a fan favorite, and he’s hoping that his straightforward creative process will please his core fans. “I’m cocky when it comes to my fans and my music ‘cause I know my fans talk to me,” “I want my fans to look at they haters like, ‘Told y’all my boy was gonna go hard. F*ck y’all.’ I want my fans to hear Flockaveli II, and I want them to put a dread wig on and shake their head and rock with me.”