Battle Of The Blues Bands 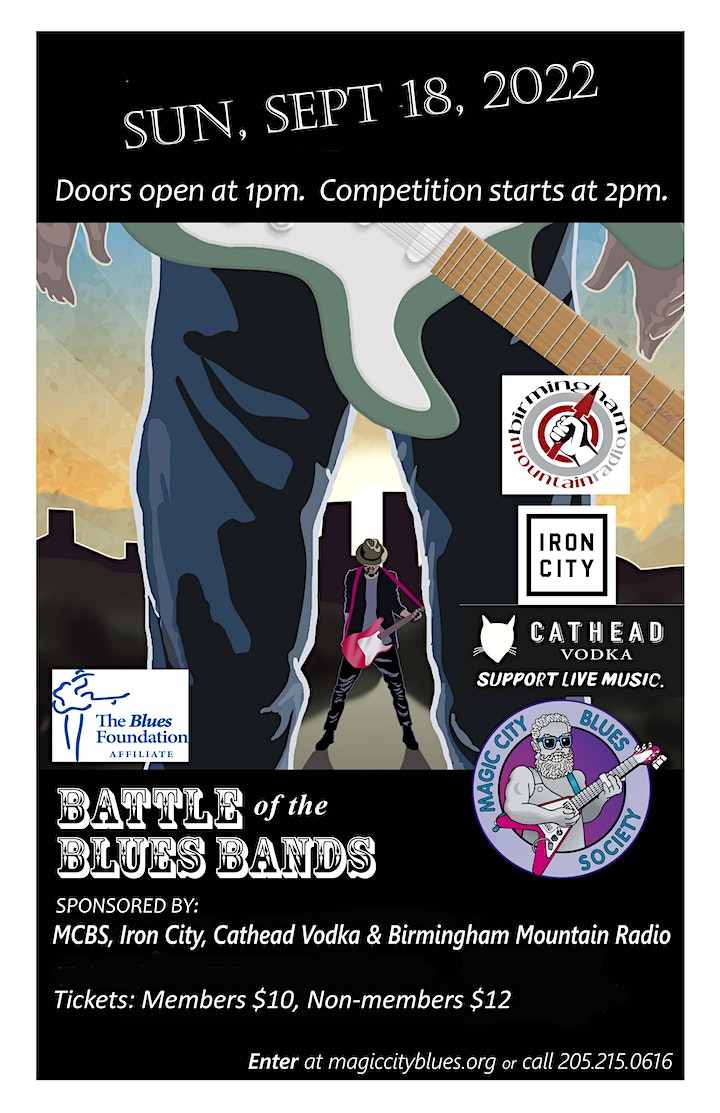 Here are links to more information and a link to register for the competition. Any band from Alabama that plays blues can enter.

Battle Of The Blues Bands Information

Battle Of The Blues Bands - REGISTRATION

What: Battle of the Blues Bands

the Blues Bands. The winners will represent the Magic City Blues Society at the 38th International Blues

from around the world will compete. The winner of the IBC will get a lot of sponsorship opportunities

and will be booked for some of the most prestigious Blues festivals around the country. Many artists

have used this competition to make the national Blues scene. We are looking for the best Blues bands in

Alabama to compete in this Battle of the Blues Bands contest.

There will be two first place winners: one band and one solo/duo act.

The MCBS will give a stipend to the winners to assist with the costs of attending the finals in Memphis.

An act may only enter the IBC 3 times. They may not participate 3 consecutive years. A musician may

not compete in the band category and the solo/duo in the same year. All members of a winning act must

attend the IBC. Acts must enter the challenge of their own/home affiliate first if they are holding a

competition. If they are not or if they do not win, they may enter the challenges of no more than 2

affiliates in that year provided those affiliates are within 250 miles of the home affiliate.

of all blues forms. Any given judge panel will include members with varying opinions of Blues, covering

the spectrum of Blues from the most traditional to soul/blues and rock/blues.

•Blues Content: The sound and feel of the music should be true to any of blues sub-categories:

listening for inspired and original song selections or new takes on blues standards. Creative reach is

lick by lick is discouraged, will not be looked upon favorably by the judges, and will be reflected in

•Vocals: The act’s vocal skills to include concepts of tone, musicality, meaning, and expression.

•Instrumental Talent: Ability level on all instruments featured within the act.

•Stage Presence: The ability to command the attention of the audience by the impressiveness of one’s

manner and appearance on stage. Judges will consider how an act connects with and engages the

audience in the music. Proper use of microphones and amplification will be considered.

Judges will score acts on a 10 point scale, with 10 points being the highest score received and 1 point

being the lowest. The following weights will be used in calculating final scores:

•Raw scores for Blues Content will be multiplied by four

•Raw scores for Originality will be multiplied by three

• Raw scores for Talent will be multiplied by two

• Raw scores for vocals will be multiplied by two

•Raw scores for Stage Presence will be multiplied by two

The maximum Total Weighted Score an act may receive is 130.

An act will be penalized one point from its Total Weighted Score for each of the following:

•Each ten seconds that it runs overtime during a competition performance.

•Finishing 3 or more minutes before its allotted performance time expires.

•Showing up late and/or missing Orientation

•Not being ready to perform at stated time

Each judge will indicate his or her Raw Score, between 1 and 10, in each category and turn that

information over to the Scorekeeper using the following scale:

•1-3 – Typical of a beginning blues band

1.The Scorekeeper will multiply the Raw Score in each category by the established multiplier to get each

judge’s Individual Weighted Score in each category for each act.

2.The Individual Weighted Scores for each category will be added together to determine each act’s Total

Weighted Score for each judge.

3.Any penalty points assigned will then be deducted from each judge’s Total Weighted Score to obtain

the act’s Net Weighted Score for each judge.

4.After all acts have been judged and each act’s Net Weighted Score per judge calculated, each act will

be ranked by judge based on that judge’s order of scores, with the act receiving the judge’s highest Net

Weighted Score being given a ranking of 1, and so on for that judge. This will reveal each acts Final

Ranking Number for each judge.

5.The Scorekeeper then will total the Final Ranking Number from all judges for each act to determine

the Gross Final Ranking. This figure is averaged (divided by the total number of judges) to Achieve the

6. The act with the best Aggregate Act Ranking will be the top finisher.

7.In the case of a tie, the Scorekeeper shall calculate the sum of all Net Weighted Scores from all judges

for the tied acts. The band with the higher sum of Net Weighted Scores wins.

The MCBS will provide backline and sound. The setup on stage will include a drum kit with snare drums,

amps, keyboards and mics. The backline in will be based on the act’s registration information.

Drummers should bring their own cymbals and kick pedals. Harmonica players may (but are not required

keyboard and keyboard amps. Keyboard stands will be provided. Effects racks and other auxiliary

equipment are permitted. Musicians must include on the online registration form any additional or

being the only exceptions). Musicians should bring their own DI boxes. Every effort will be made to

Iron City is one of the most inspired music and event venues in Birmingham, and we can’t wait to share it with you.