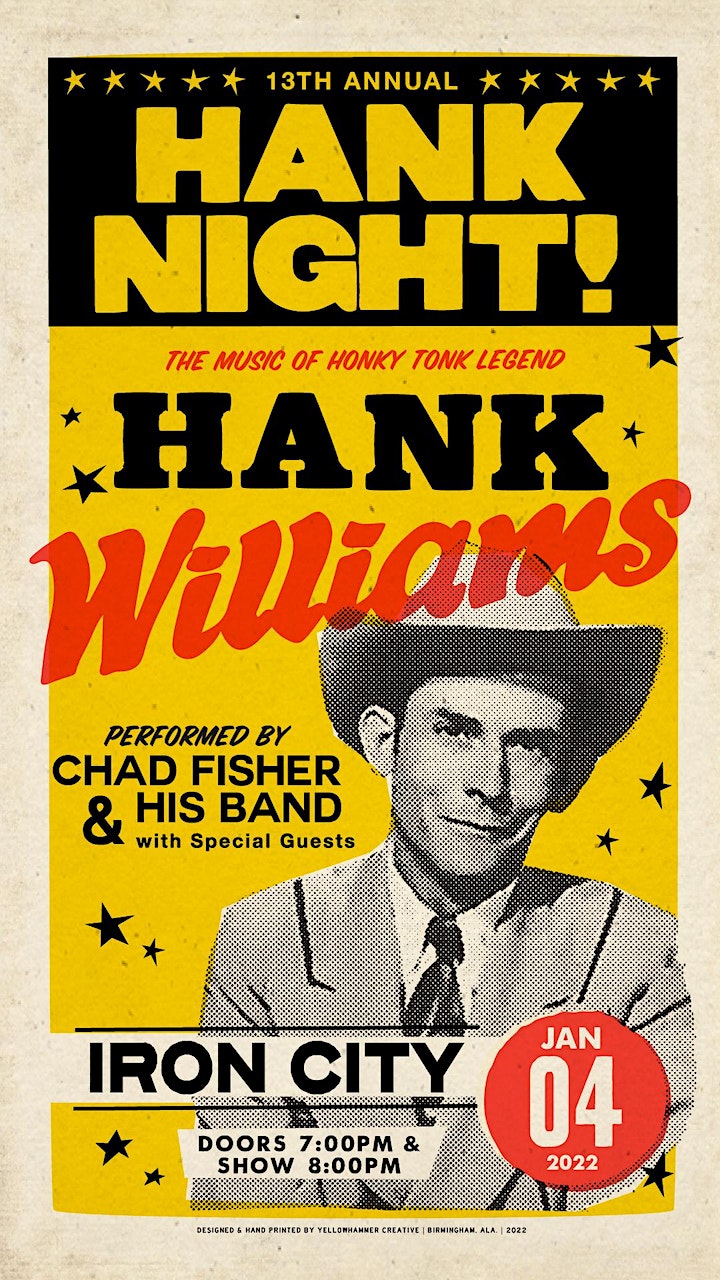 One of Birmingham's most loved annual events returns to Iron City Bham! Join Chad Fisher and his band for the 13th Annual Hank Night on January 4th. Celebrate Alabama native, and one of the most significant and influential American singers and songwriters of the 20th century, Hank Williams. Sing along to all of the legendary hits like "Your Cheatin' Heart", "Hey, Good Lookin'", and "I'm So Lonesome I Could Cry" played by an all-star line up of musicians including Chad Fisher of St. Paul and The Broken Bones!

On December 30th, 1952 country music legend Hank Williams checked into the Redmont Hotel in Birmingham, Alabama. It would be his last full night on earth. Hank Night is a commemoration of the musical legend's life and celebration of the music he left behind. Tickets are only $15 in advance and $20 at the door.

“Chad Fisher hand picks an All Star cast of Alabama’s best musicians to recreate the music of Alabama’s own musical genius, Hank Williams. This show is so much fun. I love it all, but I especially love the lyrics, the singing, and the slide guitar. I’m reminded of how proud I am to be from Alabama. This is my favorite night of the year”. – Steve DeMedicis

Chad Fisher has become one of the most sought after musicians in the south. He cut his teeth playing the trombone in the rich soul and jazz scene of Alabama and Mississippi, performing with local and regional bands, as well as soul legends The Temptations, Four Tops, Muscle Shoals' The Swampers, and a host of others.

He is currently touring with St. Paul and The Broken Bones, including the band's recent dates opening for The Rolling Stones.

He can also be heard on acclaimed songwriter Jason Isbell's record Live in Alabama and appears on Isbell's recent performance on PBS's Live at Lincoln Center.

Fisher's own band of all-star musicians is becoming known as one the region's best. His songwriting is full of vocal melodies and harmonies inspired by the country music he heard as a boy, but combines the instrumental textures, horns, and rhythms of soul, afro-beat, and rock to create a unique and exciting music.

Iron City one of the most inspired music and event venues in Birmingham, and we can’t wait to share it with you.